The Top 5 All-Mexican Fights of All Time

A few days ago, Mexico was knocked out of the FIFA World cup by Brazil in what was a historic run for the nation.

The Mexicans opened in the best way possible, defeating defending champions Germany 1-0 and went out on their shield against Brazil, having left it all on the field.

In celebration of Mexico’s run, we will rewind time and look back at the greatest all-Mexican fights in boxing history.

The third bout between Erik Morales and Marco Antonio Barrera was a historic close to one of the greatest boxing trilogies of all time.

In the lead up to this fight, both Morales and Barrera had won one of the matches and this fight was correctly billed as “once and for all.” Barrera entered as a slight underdog on the cards, as he was coming off a stoppage loss to Manny Pacquiao.

The first two fights in the trilogy had been wars, and the third lived up to expectations as well. From the opening to the final bell, the two warriors fired relentless combinations on the inside.

In many wars, the action may begin to cease in the later rounds due to fatigue, but that was not the case between these two. Instead, the action rose to a peak in the 11th round and earned the round of the year.

Though both fighters made their nation proud, Barerra won out the night and the series by majority decision.

In 1977, there were only two names worth mentioning in the Bantamweight division: Carlos “the Dog” Zarate and Alfonso Zamora. The two fighters had 73 wins with 72 knockouts between them and ruled the division with an iron fist.

As time continued, it became increasingly evident that the two fighters’ paths would soon cross. In 1977, the time arrived and the two Mexican warriors agreed to meet in Inglewood’s Forum for a 10 round non-title fight.

As soon as the fight began, it was clear to everyone watching that the bout was not reaching the final round. Though Zamora began strong, Zarate found his groove in the third round.

The taller man began to time Zamora’s head movement and dropped him in the third with a plethora of hooks. The fourth began similarly, with a Zarate knockdown early in the round, but ended with a vicious seven-punch combination by Zarate that left Zamora in a crumpled heap.

Though Zarate emerged the victor that night, the public gained respect for both fighters. This fight is a classic example of the famous “Mexican style” fight.

Widely regarded as one of the most brutal boxing rivalries of the 21st century, Israel Vaquez and Rafael Marquez battled four times between 2007 to 2010.

The first bout resulted in Marquez winning due to Vasquez’s broken nose in the sixth, while the second resulted in a thrilling sixth-round knockout in favor of Vasquez. With both men having won one fight each, the stage was set for another legendary third match between two Mexican champions.

As they met in the Home Depot Center, the crowd witnessed a bloody spectacle that night. As each power punch immediately followed up the last, spectators remained convinced that the fight would end at any moment.

The only issue was that it did not end. The fight endured all 12 grueling rounds, seeing Vasquez receive two gashes over his eyes.

As the war entered the final round, it was even on everybody’s scorecard but Vasquez scored a controversial knockdown and edged out a split decision.

Ruben “El Puas” Olivares is considered among the top Bantamweights of all time, as well as one of the best Mexicans to ever step into the ring. He had gone into the first title fight with Jesus “El Chucho” Castillo on a 21-fight knockout streak.

Though the fight went the full 15 rounds, Olivares emerged the victor by UD. The fight was historic however, and led the rematch to be scheduled a mere six months later.

The second bout began slowly, the two fighters re-familiarizing themselves, but Olivares picked up a gash almost immediately, which spurred the fight on. By Round 3, the fight had returned to trench warfare, both fighters constantly trading signature shots.

Throughout the fight, Olivares’ cut got continually worse and he was unable to make any headway on the judges’ scorecards, despite forcing Castillo against the ropes to unleash his combinations. The fight was such an intense war between the two warriors, that neither backed down and the referee was forced to end the fight in the 14th round due to the river of blood flowing from Olivares’ eye.

History was made with this bout and the two warriors met once more, Olivares taking the trilogy by UD. 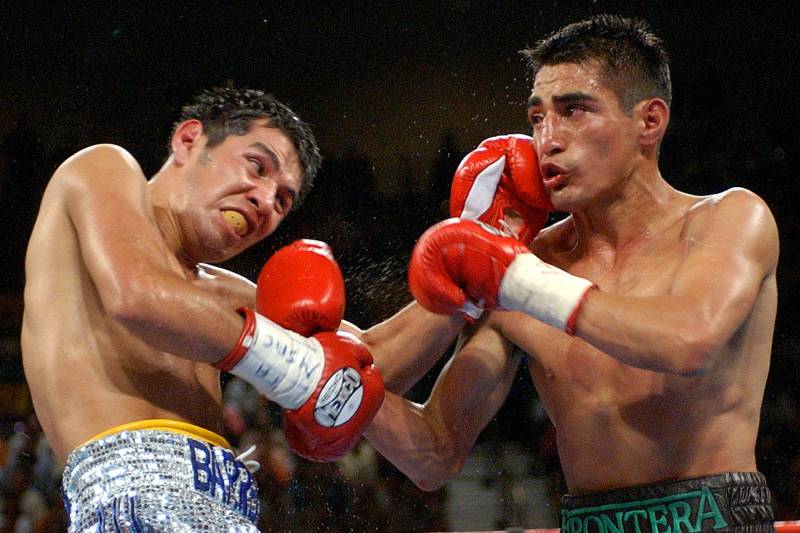 The trilogy between Erik Morales and Marco Antonio Barrera was so historic that two of the three bouts ended up on this list. The trilogy had it all: bad blood between the two fighters, contrasting styles and an equal hunger to rule their division.

After the two men refused to touch gloves before the fight, they wasted no time in trading immediately. The shorter Barrera immediately closed distance and met Morales in the middle of the ring, going to work on his opponent’s body.

Morales met Barrera’s pressure with short combinations of his own however, and the men traded back and forth through the first four rounds.

Come Round 5, Morales was finding constant success with his right hand, slowing Barrera down momentarily. Barrera recovered quickly however and let loose an attack of his own that stunned the taller fighter.

This back-and-forth intense action continued throughout the rest of the fight through the 11th round. The two men had shown a newfound respect for each other in the 12th by finally touching gloves, then continuing to finish out the war.

The final round saw a finish that the war deserved, both men wailing on each other for the full three minutes. The pressure boiled over and became too much for Morales, dropping him to his knee momentarily.

Despite the knockdown, Morales emerged the victor by split decision and he immediately moved up in weight. It would be a full two years before the two fighters clashed again, but they left a mark on boxing history that night in Las Vegas.

The post The Top 5 All-Mexican Fights of All Time appeared first on Round By Round Boxing.